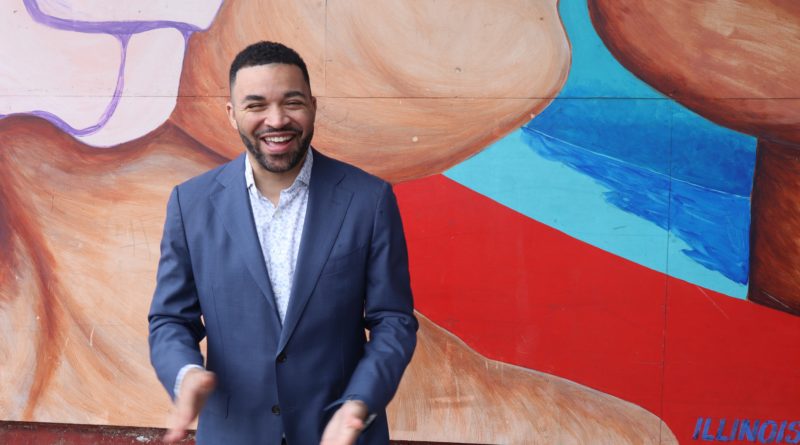 Jason Clark is the executive director of Tech:NYC, a nonprofit organization aimed at building a vibrant and dynamic tech ecosystem across the five boroughs.

“One of the things that I love about this job is that I feel like we’re in a real moment when it comes to technology here in New York City,” Clark tells This is Queensborough magazine. “I also feel that this relationship that the public has with technology has fundamentally changed coming out of this pandemic.”

Tech:NYC started in 2016 with only five member companies. In the six years since, it has grown exponentially to include more than 800 different tech-based businesses that are either locally-based or have a strong presence in New York.

“I think a lot about the fact that, especially during this pandemic, most sectors were having a lot of trouble. In fact, all sectors found themselves going in the wrong direction,” Clark said, “but the one sector that actually had growth during that time was technology.”

Clark explained that over the last ten years, there have been approximately 106,000 tech-based jobs created in New York City.

Tech:NYC members range from major corporate sponsors, like Spotify and Google, to a variety of smaller startup companies, which Clark says, account for about 75 percent of the overall membership.

Clark explained that the variety of different member organizations also creates a variety of different needs to be met. For some, it’s about working with city and state lawmakers to get policies in place to build a strong cryptocurrency industry, or about taking the next step when it comes to life sciences, healthcare, gaming, etc.

“This year we partnered with Cornell Tech and Google on something called ‘New York City Recovery Challenge,’ and what they did is try to go through different startup organizations that are trying to solve issues that impact all New Yorkers. Some of them, for example, are doing things for job readiness for folks who are differently-abled, others are doing things that have to do with making sure there are transportation options available, others are doing things to make sure there are more opportunities for underbanked communities out there,” Clark said. “For me, I think that kind of encapsulates what I really think that technology can be here.”

Clark stressed that during the pandemic, we saw people using telehealth who hadn’t before, students adapting to remote learning, business meetings conducted via Zoom, all of which were new ways that we were made to think innovatively about communicating with each other without actually leaving the house. He said that even the contact tracing that took place during the height of the pandemic was because of technology that was able to identify it.

During the second year of the pandemic in 2021, New York City happened to see a record year when it came to venture capital funding in the tech sector. According to figures provided by the New York City Economic Development Center, in the first quarter of 2021, NYC-based companies pulled in $7.6 billion in seed money through venture funding.

Clark said that the silver lining that came out of the pandemic was that it led many people to see that tech could be an economic driver for New York.

“I want to make sure, especially for someone like myself, coming from Southeast Queens, to figure out ways folks in my community can have access to jobs that can sustain a family,” Clark said. “A lot of the jobs that were historically and traditionally done in the past are not always as prevalent as they were before. I feel in my bones that tech can really be that thing for it, but we have to do a better job of teaching students and re-skilling adults for some of these opportunities that are available now in cybersecurity and data analytics.”

One program that Clark said he is really excited about is the launch of Tech:NYC’s summer youth employment program, “Tech Year NYC,” which aims to provide more tech-based internship opportunities both during the summer and throughout the school year.

“Our goal is to make sure at least a hundred of our member companies commit to having internship opportunities,” Clark said. “So that again, you play a more proactive role in building that pipeline of next tech leaders that come homegrown from places like Queens.”

Tech:NYC is also working on an assessment of the tech ecosystem here in New York and what opportunities are available within the vastly growing field. Clark suggested that some sectors prime for development and growth in NYC include, FinTech – short for “financial technology” – cryptocurrency, gaming, and wellness.

“There’s a lot of excitement about what can be done in those spaces,” Clark said, “If we can be able to make sure that we are incubating them so that they can be able to grow, it helps not only with the business side of things, being able to create a stronger more secure workforce in New York, but it also means that we’re gonna have more technology out there that’s going to improve our lives.”

To find out more about the tech ecosystem in New York City or to find out ways how to be part of this growing industry boom, visit technyc.org.